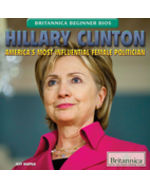 Influential lawyer, first lady of Arkansas and then the United States, senator for New York, and U.S. secretary of state—Hillary Clinton has been an influential figure in American politics for over three decades. This biography aimed at the lower elementary market presents Hillary's achievements and policies in a simple, easy-to-grasp manner.