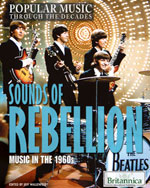 Sounds of Rebellion: Music in the 1960s, 1st Edition

The music of the 1960s is perhaps as memorable as the historical milestones of the era. Timeless bands, such as the Beatles and the Rolling Stones, emerged from England while the U.S. saw the rise of such folk musicians as Bob Dylan and the explosion of soul, with such legends as Aretha Franklin and James Brown providing the soundtrack to the fight for civil rights. Accessible text captures the extraordinary sounds of this unforgettable period through profiles of its greatest musical talents, placing their stories in social and cultural context.