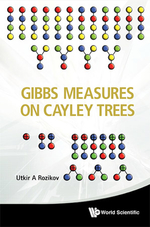 The purpose of this book is to present systematically all known mathematical results on Gibbs measures on Cayley trees (Bethe lattices).The Gibbs measure is a probability measure, which has been an important object in many problems of probability theory and statistical mechanics. It is the measure associated with the Hamiltonian of a physical system (a model) and generalizes the notion of a canonical ensemble. More importantly, when the Hamiltonian can be written as a sum of parts, the Gibbs measure has the Markov property (a certain kind of statistical independence), thus leading to its widespread appearance in many problems outside of physics such as biology, Hopfield networks, Markov networks, and Markov logic networks. Moreover, the Gibbs measure is the unique measure that maximizes the entropy for a given expected energy.The method used for the description of Gibbs measures on Cayley trees is the method of Markov random field theory and recurrent equations of this theory, but the modern theory of Gibbs measures on trees uses new tools such as group theory, information flows on trees, node-weighted random walks, contour methods on trees, and nonlinear analysis. This book discusses all the mentioned methods, which were developed recently.