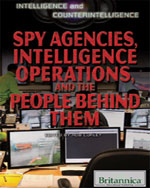 Spy Agencies, Intelligence Operations, and the People Behind Them, 1st Edition

The idea of espionage might immediately bring to mind images of danger, state secrets, and cutting-edge technologies. While these can be elements of intelligence operations, they do not provide a complete picture. There are numerous methods intelligence agencies, such as the CIA, might employ to gather information, and any number of threats that might be examined given the political climate of the day. This compelling volume examines the models intelligence agencies around the world have used both in the past and present, notable individuals, and the intelligence priorities of the Middle East and East Asia, two of the most politically volatile regions in recent history.