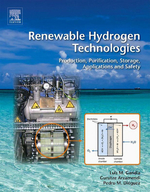 The fields covered by the hydrogen energy topic have grown rapidly, and now it has become clearly multidisciplinary. In addition to production, hydrogen purification and especially storage are key challenges that could limit the use of hydrogen fuel. In this book, the purification of hydrogen with membrane technology and its storage in "solid" form using new hydrides and carbon materials are addressed. Other novelties of this volume include the power conditioning of water electrolyzers, the integration in the electric grid of renewable hydrogen systems and the future role of microreactors and micro-process engineering in hydrogen technology as well as the potential of computational fluid dynamics to hydrogen equipment design and the assessment of safety issues. Finally, and being aware that transportation will likely constitute the first commercial application of hydrogen fuel, two chapters are devoted to the recent advances in hydrogen fuel cells and hydrogen-fueled internal combustion engines for transport vehicles. Hydrogen from water and biomass considered Holistic approach to the topic of renewable hydrogen production Power conditioning of water electrolyzers and integration of renewable hydrogen energy systems considered Subjects not included in previous books on hydrogen energy Micro process technology considered Subject not included in previous books on hydrogen energy Applications of CFD considered Subject not included in previous books on hydrogen energy Fundamental aspects will not be discussed in detail consciously as they are suitably addressed in previous books Emphasis on technological advancements Chapters written by recognized experts Up-to date approach to the subjects and relevant bibliographic references