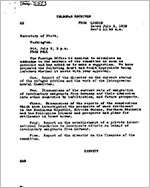 Intergovernmental Committee on Refugees: The West's Response to Jewish Emigration

The Intergovernmental Committee on Refugees was organized in London in August 1938 as a result of the Evian Conference of July 1938, which had been called by President Roosevelt to consider the problem of racial, religious, and political refugees from central Europe. Its main purpose was to assist in the resettlement of refugees from Europe in countries allowing permanent immigration. At the Anglo-American conference at Bermuda in April 1943, recommendations were made to the Committee and adopted in August 1943 for an extension of its mandate and structure in order to take into account not only immediately urgent situations but also the longer-term problems of the postwar period. After the establishment of the United Nations Relief and Rehabilitation Administration the Committee's responsibilities were limited to refugees in areas in which that Administration was not active and to refugees who for one reason or another did not come within the jurisdiction of the Administration, such as stateless refugees.

In July 1944, 37 governments participated in the work of the Committee. Of these, representatives of nine countries, including the United States, served on its Executive Committee. The primary responsibility for determining the policy of the United States with regard to the Committee was that of the Department of State. It ceased to exist in 1947, and its functions and records were transferred to the International Refugee Organization of the United Nations. Records of the Washington representative of the Committee were maintained at the State Department.