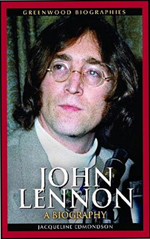 John Lennon was a singer, songwriter, activist, artist, and writer whose life and work left an indelible mark on rock music and the world. Lennon first became famous as the founding member of The Beatles, and his songwriting partnership with bandmate Paul McCartney remains legendary in the history of pop music. Lennon's creative work, which extended well beyond his years as a Beatle and lasted until his final days, still provides enjoyment and inspiration to millions around the world. This biography provides a comprehensive account of John Lennon's life for students and general readers, integrating information from interviews conducted during his life with published accounts of Lennon from a range of perspectives. It covers the time from his birth in Liverpool in 1940 to his murder in New York City in 1980.