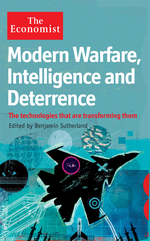 For those who want to be smart about our ability to wage war and to protect ourselves - and where much of the world's billions of dollars on defence spending goes.The Panzerfaust-3, a German shoulder-fired heat-seeking antitank missile, can punch through a metre of solid steel-far more than any armoured vehicle could carry. The MPR-500, an Israeli precision bomb, can hammer through several storeys of a building and explode on a chosen floor. These and myriad other military and intelligences technologies are changing the world. This Economist book describes these emerging technologies and places them in the larger context of today's politics, diplomacy, business and social issues. It shows how efforts to win wars or keep the peace are driving enormous and multifold technological advances. Broadly speaking, defence technologies will continue to provide enormous advantages to advanced, Western armed forces.The book is organised into five parts: land and sea, air and space, the computer factor, intelligence and spycraft, and the road ahead, which examines the coming challenges for western armies, such as new wars against insurgents operating out of civilian areas.Comprising a selection of the best writing on the subject from the Economist, each part has an introduction linking the technological developments to political, diplomatic, business and other civilian matters.