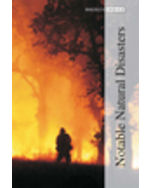 Notable Natural Disasters contains scientific and historical overviews of 23 categories of natural disasters followed by a chronological survey of the 100 worst or most notable disasters in history, including such recent events as the 2004 tsunami and Hurricane Katrina. This set combines clearly explained scientific concepts with gripping narrative details about memorable disasters. It focuses on events caused, at least in part, by uncontrollable forces of nature. So, though human error played a role in many iceberg collisions, natural conditions were clearly a cause. Decisions were also made regarding scope and focus. For example, only wildfires affecting cities or whole regions are addressed, rather than tragic blazes in single buildings such as hotels or theaters.The set begins with disaster overviews by type. Each essay explains the disaster in scientific terms. The overviews are followed by entries on the 100 worst disasters in history. These narrative-style essays offer facts, figures, and interesting stories. Each event entry begins with a general description of location or the popular designation for the disaster, plus the most accurate date for the event.