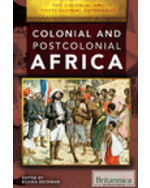 By the early twentieth century, nearly the entire continent of Africa had been divided up between European powers. This volume traces the history of colonialism in each of Africa's regions, as well as the fight for independence and the challenges of establishing viable nations after years languishing under the colonial yoke. The political, economic, and social elements of colonialism are all explored. The title also delves into the patterns in European-African interactions that led to colonialism, including the slave trade and the ivory trade. A comprehensive, wide-ranging reference volume.