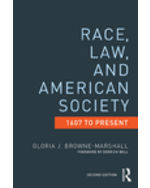 This second edition of Gloria Browne-Marshall's seminal work , tracing the history of racial discrimination in American law from colonial times to the present, is now available with major revisions. Throughout, she advocates for freedom and equality at the center, moving from their struggle for physical freedom in the slavery era to more recent battles for equal rights and economic equality. From the colonial period to the present, this book examines education, property ownership, voting rights, criminal justice, and the military as well as internationalism and civil liberties by analyzing the key court cases that established America's racial system and demonstrating the impact of these court cases on American society. This edition also includes more on Asians, Native Americans, and Latinos. Race, Law, and American Society is highly accessible and thorough in its depiction of the role race has played, with the sanction of the U.S. Supreme Court, in shaping virtually every major American social institution.