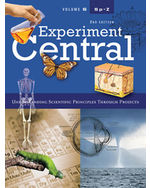 Today's students have moved light years beyond projects involving food coloring, clay and spray-painted Styrofoam. They're interested in exploring theories and concepts such as acid rain, biomes, composting, and solar energy. That's why U·X·L created Experiment Central. In six volumes, students and general researchers will find examples of science projects and experiments they can replicate for science fairs and other purposes, as well as suggestions on ways they can design their own project that investigates a specific scientific topic. Unlike other science experiment resources, Experiment Central also provides an accessible explanation of the theory behind the experiment.

A wide range of subjects within life science, physical science, environmental science and earth science are covered. Volumes are alphabetically arranged by scientific concept or theory. Arranged alphabetically by 97 scientific concepts, Experiment Central details two to three experiments per entry, offering everything students need to put the scientific method to work: explanation of scientific theory, purpose/hypothesis of experiment, materials needed, budget, timetable, step-by-step instructions, summary of results, variables, how to design your own experiment, and more.

Student-friendly features include sidebars on safety, troubleshooting, and other important aspects of hands-on scientific research; a "Words to Know" section in each entry as well as a general glossary; a parent's guide; and approximately 450 full color photos and 450 technical drawings. Indexes offer access by level of difficulty, budget, time frame, scientific subject, and general alphabetical index, including name, place and other important terms mentioned in the text.

"Part ideas and suggestions, part inspiration, this set will go a long way in easing the stresses of the science-fair season." — School Library Journal (November 2000)

"Highly recommended for topicsa all across the scientific spectrum." - Blanche Woolls and David Loertscher, Reference Reviews on galegroup.com

"This extraordinary science resource is sure to intensify the interest of curious young minds in scientific thought and support the science curriculum. Highly Recommended."--The Book Report (February 2001)

"[C]learly written and well organized. ... Students, teachers, media specialists, and librarians should find much useful material here. The extensive indexing and general organization of the information make this an inviting source that would work for grades four to six, a middle-school science laboratory, or a school library reference collection. Public libraries supporting local schools will also want to make this purchase." — Reference Books Bulletin/Booklist (Oct. 1, 2000)

"[T]eachers who lack background in science or a science library, as well as adults working with students in informal science settings, will be delighted to find such an inclusive handbook." — Voice of Youth Advocates (October 2000)

"This extraordinary science resource is sure to intensify the interest of curious young minds in scientific thought and support the science curriculum. Highly Recommended." -- Library Talk (January/Febraury 2001)