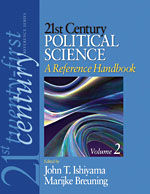 Via 99 entries or "mini chapters," the SAGE 21st Century Reference Series volumes on political science highlight the most important topics, issues, questions, and debates any student obtaining a degree in this field ought to have mastered for effectiveness in the 21st century. 21st Century Political Science: A Reference Handbook serves as an authoritative reference source that meets students' research needs with more detailed information than encyclopedia entries but not so much jargon, detail, or density as a journal article or a research handbook chapter. An editorial advisory board comprised of eminent scholars from various subfields, many of whom are also award winning teachers, selected the most important general topics in the discipline. The two volumes are divided into six major parts: General Approaches of Political Science; Comparative Politics; International Relations; Political Science Methodology; Political Thought; and American Politics. A section on identity politics includes chapters on topics such as Race, Ethnicity, and Politics; Gender and Politics; Religion and Politics; and LGBT Issues/ Queer Theory.