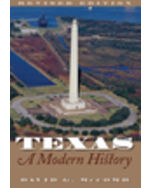 Texas, A Modern History has established itself as one of the most readable and reliable general histories of Texas. David McComb paints the panorama of Lone Star history from the earliest Indians to the present day with a vigorous brush that uses fact, anecdote, and humor to present a concise narrative. The book is designed to offer an adult reader the savor of Texan culture, an exploration of the ethos of its people, and a sense of the rhythm of its development. Spanish settlement, the Battle of the Alamo, the Civil War, cattle trails, oil discovery, the growth of cities, changes in politics, the Great Depression, World War II, recreation, economic expansion, and recession are each a part of the picture. Photographs and fascinating sidebars punctuate the text. In this revised edition, McComb not only incorporates recent scholarship but also tracks the post–World War II rise of the Republican Party in Texas and the evolution of the state from rural to urban, with 88 percent of the people now living in cities. At the same time, he demonstrates that, despite many changes that have made Texas similar to the rest of the United States, much of its unique past remains.