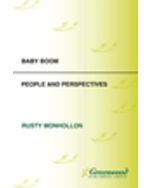 Between 1946 and 1964, more than 75 million babies were born in the United States -- the largest single population spike in the country's history. The size of this generation (at times approaching 1 out of 3 Americans) has had a profound impact on the economy, education system, pop culture, consumerism, the workplace, urban/suburban life, and the prevailing political climate.

This revealing new work goes inside the Baby Boom generation to look at how everyday people within the boomer demographic changed -- and were changed by -- the course of American history.

Baby Boom: People and Perspectives does not focus on one single historic moment, but rather follows different groups within the Baby Boom generation as they move through history. From the generation gap of the 1950s to the civil rights movement, from Vietnam and the counterculture of the 1960s to Watergate and the Reagan era, and from the Clinton years to September 11th and the recent resurgence of conservatism, this insightful social history shows how Baby Boomers across the breadth of American society experienced and impacted the same historic events differently.