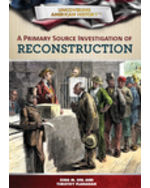 The era of Reconstruction followed the long, bloody Civil War, and became one of the most important in the nation's history. It set guidelines for race relations and the federal government's involvement in them. From black codes to voting rights for black men, Reconstruction was an active, but contentious period. Documents such as amendments to the Constitution and speeches from the nation's leaders are examined along with text that provides the necessary context to fully understand the volatile issues debated. This fully illustrated volume highlights the people and their works with a clear and authoritative voice.