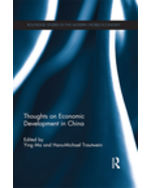 This book is about mutual influences of thinking about economic development in China and in the West, from the 18th century until the present. Its chapters are contributed by development economists and historians of thought from China and other parts of the world.