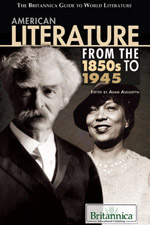 The Britannica Guide to World Literature: American Literature from the 1850s to 1945, 1st Edition

Deviating from the romanticism of earlier works, American literature that emerged after the mid-19th century adopted a distinct realism and an often critical view of American society. With penetrating analyses, writers such as Henry Adams and Upton Sinclair exposed fundamental flaws in government and industry, while Mark Twain and H.L. Mencken incisively satirized social ills such as prejudice and intolerance. Readers will encounter these and other great minds whose fluid pens challenged the status quo.