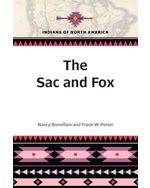 The Sac and Fox, 1st Edition

The Sac and Fox, part of the Indians of North America series, presents a fascinating portrayal of the history and culture of these native people. Longtime friends and trading partners, the Sac and Fox Indians became closely tied as they were forced westward by the expansion of the United States. In 1832, they joined forces against the United States in the Black Hawk War. Ultimately, the US militia triumphed causing the massacre of many Indians. Notable members of these tribes include Chief Black Hawk and Olympic athlete Jim Thorpe.

Front Cover.
Copyright Page.
Chapters.
1: Roots of an Alliance.
2: Sac and Fox Traditions.
3: Centuries of Change.
4: The Critical Years.
5: War on the Frontier.
6: The Dispossessed.
7: The Sac and Fox Today.
Support Materials.
Bibliography.