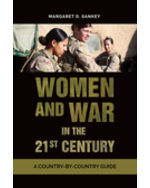 Women and War in the 21st Century: A Country-by-Country Guide, 1st Edition

This timely and fascinating book explores how different countries have determined to allow women in the military to take on combat roles-whether out of a need for personnel, a desire for the military to reflect the values of the society, or the opinion that women improve military effectiveness--or, in contrast, have disallowed such a move on behalf of the state. In addition, many countries have insurgent or dissident factions, in that have led armed resistance to state authority in which women have been present, requiring national militaries and peacekeepers to engage them, incorporate them, or disarm and deradicalize them. This country-by country analysis of the role of women in conflicts includes insightful essays on such countries as Afghanistan, China, Germany, Iraq, Israel, Russia, and the United States. Each essay provides important background information to help readers to understand the cultural and political contexts in which women have been integrated into their countries' militaries, have engaged in combat during the course of conflict, and have come to positions of political power that affect military decisions.