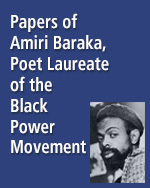 The Papers of Amiri Baraka, Poet Laureate of the Black Power Movement

Amiri Baraka is the author of over 40 books of essays, poems, drama, and music history and criticism, a poet icon and revolutionary political activist. As a young man in the 1960s, Baraka (then known as LeRoi Jones) galvanized a second Black Renaissance, the Black Arts movement. The ideological and political transformations of Amiri Baraka from a Beat poet in Greenwich Village into a militant political activist in Harlem and Newark was paradigmatic for the Black Revolt of the 1960s.