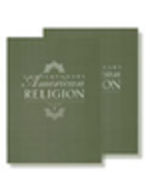 Through waves of new immigration, and the social influence of '60s counterculture, the United States has seen an explosion in the variety of religious practice since about 1965. This two-volume work lets students, researchers, and general readers explore American religion in all its diversity. In addition to profiling religious groups from the modern forms of Catholicism and Judaism to some of the more-extreme cults such as Heaven's Gate and the Branch Davidians, the set includes articles on cultural, social, and legal issues, as well as holidays and celebrations, the arts, and more. While Gale strives to replicate print content, some content may not be available due to rights restrictions. Call your Sales Rep for details.

"Macmillan has produced an excellent encyclopedia surveying the full spectrum of major religious traditions, leaders, controversial groups, ritual practices, and beliefs from a modern American perspective. Attention is given less to what the articulated official teachings and practices are and more to how those beliefs are popularly understood and lived. Here one can experience the phenomenon of contemporary American religion in all its diversity from about 1965 to the present." -- Booklist (May 1, 2000)

"Academic libraries, all seminary libraries, and larger public libraries will want to add Contemporary American Religion to their reference collections. It will be especially useful for courses in religion and American studies, but will provide insight to those seeking a better understanding of the religious context of modern American life."-- Reference and User Services Quarterly (Summer 2000)

"Whether it is mainstream religion, the occult, new age or indigenous, it is covered in these two volumes. There is even an article on Cyber Religion...Browsing through this set gives one a sense of the expanding complexity of American religious and spiritual life...Complementing and updating standbys like Macmillan's Encyclopedia of the American Religious Experience...this reference should find a place on both academic and public library shelves." -- Against the Grain (June 2000)

"This resource will satisfy both the general reader and the researcher and is recommended for large public library and academic-library reference collections."-- Booklist (May 1, 2000)

"...Each signed entry offers and clearly written, well-balanced discussion of the topic followed by see-also references and a bibliography." -- School LibraryJournal (May 2000)

"Discussions of potentially controversial issues, e.g., 'Wicca' or cults, are descriptive and nonjudgemental. The examinations of the moral issues involved in a number of contemporary, often highly charged political issues such as abortion are particularly valuable."-- School LibraryJournal (May 2000)

"...where interest demands and budget permits, this is a worthy addition."-- School LibraryJournal (May 2000)

"...the work delves into the diversity and pluralism of religion in the United States and is especially inclusive of those religions and beliefs that have accompanied immigrants from around the globe."-- Reference and User Services Quarterly (Summer 2000)

"Over 270 contributors, mainly academics, provide a wide array of viewpoints and expertise that make this work one of extremely broad scope."-- Reference and User Services Quarterly (Summer 2000)

"The work expands and updates the coverage of American religion offered by other reference sources..."-- Reference and User Services Quarterly (Summer 2000)

"The 521 articles contributed by 264 scholars include numerous cross-references and brief bibliographies to aid students with their research. An excellent index and 195 photos also grace this outstanding new guide to religion and contemporary American culture." --Lawrence Looks at Books, February 2000

"This excellent source furnishes students and scholars with information on contemporary religion, personalities, and popular topics from Fundamentalist Christianity to feng shui." -- American Libraries (May 2001)