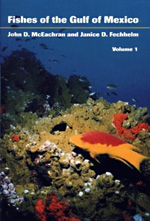 Fishes of the Gulf of Mexico: Myxiniformes to Gasterosteiformes, 1st Edition

The Gulf of Mexico is the ninth largest body of water in the world and contains over 15 percent of all known species of marine fishes. This diverse fish fauna has been the subject of many publications, but, until now, no work has ever surveyed all known species, including the deep sea fishes and those of the southern Gulf. This book is the first of two volumes that will cover the entire fish fauna of the Gulf of Mexico. An introductory section that outlines the Gulf's geographical setting, geological origin, current patterns, tides, sediments, meteorology, ecology, and biological exploration is followed by a key for the forty-four orders of fishes known from the Gulf. Keys and descriptions are provided for families, which are arranged phylogenetically, and for the species, which are arranged alphabetically, described, and distinguished from similar species. All but a few species are illustrated. 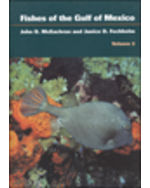 Fishes of the Gulf of Mexico: Scorpaeniformes to Tetraodontiformes