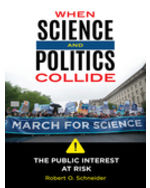 When Science and Politics Collide: The Public Interest at Risk, 1st Edition

The United States is waging a political war against science, and the stakes are increasing. When it comes to areas in which science and politics must interact, such as genetics, climate, and energy, there are always political interests pushing to spin the relevant science, but this becomes problematic when Americans abandon rationality for ideology or misinformation manufactured to confuse and persuade them. In a series of five contemporary examples, this book makes the case that none of the ways in which science and politics currently communicate serve the public interest and that some of them actually result in great harm. It explains that whether disagreements are about climate change, vaccines, pandemics, or fracking, experimentally proven and reproducible data and evidence can save lives--and poor, politically motivated policies can doom them. The book concludes with recommendations for creating a more perfect union between scientific facts and political agendas.