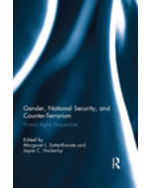 From its inception, the "War on Terror" has been a heavily gendered endeavour. A careful examination of counter-terrorism campaigns outside the current "War on Terror," reveals that such national security efforts also have a complex, but often unexplored, relationship to gender. This edited volume brings together scholars from various disciplines to consider, from a human rights perspective, the many ways in which gender interacts with counter-terrorism and national security efforts by modern states.

The book provides a systematic overview of the key intersections between gender and counter-terrorism considering what it means to take a gendered human rights approach to counter-terrorism measures, the patterns that emerge from such an approach, and the human rights tools that can be utilized in this endeavour. The book includes case studies of specific countries including Pakistan, Sri Lanka and the USA, exploring the intersections of gender and counter-terrorism in the specific country context, drawing both country-specific and general conclusions. It goes on to examine the narratives and common assumptions at work in the counter-terrorism context and the gendered impacts of specific policies, analyzing through a gender lens the counter-terrorism efforts associated with the post-9/11 "War on Terror" as well as other campaigns against terrorism.