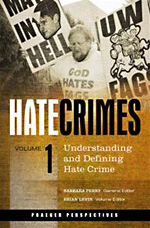 Rather than an individual crime, hate crime is, in fact, an assault against all members of stigmatized and marginalized communities. With respect to hate crime, at least, history does repeat itself as similar patterns of motivation, sentiment and victimization recur over time. Just as immigrants in the 1890s were subject to institutional and public forms of discrimination and violence, so too were those of the 1990s; likewise, former black slaves risked the wrath of the KKK when they exercised their newfound rights after the Civil War, just as their descendants risked violent reprisal for their efforts to win and exercise additional rights and freedoms in the civil rights era.

While the politics of difference that underlie these periods of animosity may lie latent for short periods of time, they nonetheless seem to remain on the simmer, ready to resurface whenever a new threat is perceived — when immigration levels increase; or when relationships between groups shift for other political, economic, or cultural reasons; or in the aftermath of attacks like those on 9/11. Yet, understanding the scope of hate crimes is impossible without examining the victims, the offenders, the consequences and harms of hate crimes, and the actual definitions of just what hate crime is.

This comprehensive five-volume set addresses these areas in careful analyses that take into account the variety and incidence of hate crimes and the impact they have on the broader realm of crime, punishment, communities, society, and the security of a pluralistic society that seeks to remain peaceful even in the face of change. This set includes attention to cutting edge topics such as hate crime in the internet age, hate rock, anti-Latino hostilities, Islamaphobia, hate crimes in the War on Terror, school-based anti-hate initiatives, victim services and counseling, and more.

Front Cover.
Half Title Page.
Title Page.
Copyright Page.
Dedication.
Contents.
Set Introduction.
Introduction.
1: The Long Arc of Justice: Race, Violence, and the Emergence of Hate Crime Law.
2: Historical Lessons: What's Past May Be Prologue.
3: Hate as Cultural Justification for Violence.
4: The Sociology of Hate: Theoretical Approaches.
5: Posing the “Why” Question: Understanding the Perpetration of Racially Motivated Violence and Harassment.
6: From the Klan to Skinheads: A Critical History of American Hate Groups.
7: White Nationalism in America.
8: Toward a Working Definition of Hate Groups.
9: Defining and Measuring Hate Crime: A Potpourri of Issues.
10: Hate Crime Laws: A Critical Assessment.
11: Weighing Genocide.
12: From Birth of a Nation to Stormfront: A Century of Communicating Hate.
About the Editor and Contributors.
Index 1.