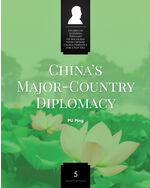 As China grows stronger and increases its global influence, the world is expecting it to play its due role as a major country and take on more international obligations.
Under the guidance of Xi Jinping Thought on diplomacy, China has developed a distinctive approach to foreign relations befitting its global role, known as China’s major-country diplomacy.
This approach aims not only to create an external environment conducive to the country’s own peaceful development and national rejuvenation, but also to promote global peace and common development in collaboration with other countries.
This book examines the innovative diplomatic concepts, visions, and initiatives that the Chinese government has proposed to achieve these goals, such as building a new model of international relations and a community with a shared future for mankind, developing a global network of partnerships, reforming the global governance system, the principle of upholding justice while pursuing interests, and the Belt and Road Initiative.