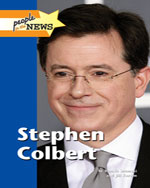 Lucent's new addition to their People in the News series is a biography of the life and career of comedian Stephen Colbert. On his television show The Colbert Report, Colbert plays the nation's fool. By good-naturedly mocking (and exposing the hypocrisy of) the mainstream media, politicians, and others, he makes pointed commentary on how those in power attempt to both manipulate and win the trust of the American public. The popularity of his show and his character has proven that Americans love and need their fool. His accolades have been serious and prestigious: Colbert has been named one of Time magazine's 100 Most Influential People for three years, from 2006 - 2008. He has also received Emmy awards, Peabody awards, and an honorary doctorate degree from Knox College. Special attention is paid to explaining the philosophy behind Colbert's show, reasons for his popularity, and examples of his cultural influence.