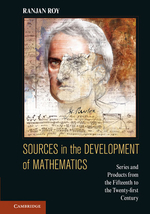 The discovery of infinite products by Wallis and infinite series by Newton marked the beginning of the modern mathematical era. It allowed Newton to solve the problem of finding areas under curves defined by algebraic equations, an achievement beyond the scope of the earlier methods of Torricelli, Fermat and Pascal. While Newton and his contemporaries, including Leibniz and the Bernoullis, concentrated on mathematical analysis and physics, Euler's prodigious accomplishments demonstrated that series and products could also address problems in algebra, combinatorics and number theory. In this book, Ranjan Roy describes many facets of the discovery and use of infinite series and products as worked out by their originators, including mathematicians from Asia, Europe and America. The text provides context and motivation for these discoveries, with many detailed proofs, offering a valuable perspective on modern mathematics. Mathematicians, mathematics students, physicists and engineers will all read this book with benefit and enjoyment.