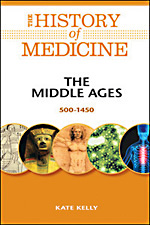 During the Middle Ages (ca. 529-1100), the rise of Christianity had a definite effect on the practice of medicine. Pope Gregory (ca. 540-604) stressed the importance of prayer over medicine, and over time that sentiment became pervasive. Each time a person was healed, it was considered a miracle. The church taught that since God sometimes sent illness as punishment, that prayer and repentance could lead to recovery. When Christians used herbal remedies, the church wanted the magic spells to be replaced with prayers of devotion. Eventually, as different schools of thought emerged, tension developed between church-related cures and folk medicine.

The Middle Ages illuminates what occurred during medieval times that affected future developments in medicine. Featuring a chronology, a glossary, and an array of historical and current sources for further research, this insightful new volume provides readers with a better understanding of the accomplishments of the time, explaining how and why scientific understanding was poised for the breakthrough of the Renaissance period. The Middle Ages is especially helpful for readers who need additional information on specific terms, topics, and developments in medical science.