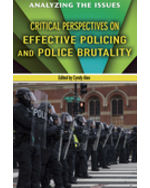 One of the most hotly debated subjects in current events is the use of force by police personnel. In recent years, protests have taken place over most of the United States after several high-profile cases in which excessive force during arrests was claimed. This volume examines opinions surrounding police action in the United States and abroad, such as arguments in favor of or against controversial policies such as stop-and-frisk. Through this wide spectrum of experiences, students are encouraged to reach their own conclusions using the information they have read and synthesized.