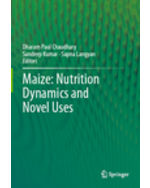 Maize is a globally important crop mainly utilized as feed, food and raw material for diverse industrial applications. Among cereals, it occupies third place after rice and wheat and is a staple food for a large segment of population worldwide particularly in the Asian as well as African countries. This monogram discusses various aspects of nutritional quality of maize such as quality protein maize which has been considered as most significant discovery in enhancing nutritional quality of cereals in terms of increasing the concentration of essential amino acids. The biochemistry of starch which is an important industrial product of maize has been discussed in detail. Further, the role of maize oil which is highly regarded for human consumption as it reduces the blood cholesterol concentration has also been elaborated. Naturally, maize is a rich source of carotenoids such as beta-carotene, zeaxanthin, lutein, cryptoxanthin which have highly diverse health benefits ranging from maintaining normal vision to lowering of oxidative stress. The need for biofortification of maize for provitamin A carotenoids and their role in alleviating vision impairments have also been discussed. The effect of various biotic and abiotic stresses particularly carbon dioxide and temperature on quality has been discussed thoroughly. Many value-added products as well as fermented foods that have been produced from maize which is consumed in different forms worldwide are also discussed. The aspects related to the maize application as fodder and as a source of malting have also been covered concisely. Overall, the book provides complete information about various quality aspects of maize. The various stakeholders such as maize researchers, extension specialists, students, teachers as well as farmers will be immensely benefitted from this monogram.