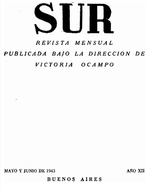 Founded in 1931 by Argentine intellectual Victoria Ocampo (1890-1979), SUR became a highly influential journal throughout Latin America and Europe. Over its long and distinguished history, SUR featured the writings of the leading figures in literature, philosophy, history and the plastic arts not only from Latin America, but also from North America and Western Europe. Contributors include LeCorbusier, Lacan, Sarte, and Woolf; Argentine authors include Borges, Cortázar, Silvinia Ocampo, and Bioy Casares. SUR translated many authors, introducing Latin Americans to Europeans, and European and North American readers to Latin Americans. Through her social commentary and choice of contributors, Ocampo advanced an Argentine version of Liberalism at a time when many Latin Americans were confronting reactionary regimes, military rule, economic chaos and demagogues.