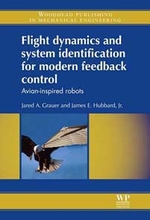 Unmanned air vehicles are becoming increasingly popular alternatives for private applications which include, but are not limited to, fire fighting, search and rescue, atmospheric data collection, and crop surveys, to name a few. Among these vehicles are avian-inspired, flapping-wing designs, which are safe to operate near humans and are required to carry payloads while achieving manoeuverability and agility in low speed flight. Conventional methods and tools fall short of achieving the desired performance metrics and requirements of such craft. Flight dynamics and system identification for modern feedback control provides an in-depth study of the difficulties associated with achieving controlled performance in flapping-wing, avian-inspired flight, and a new model paradigm is derived using analytical and experimental methods, with which a controls designer may then apply familiar tools. This title consists of eight chapters and covers flapping-wing aircraft and flight dynamics, before looking at nonlinear, multibody modelling as well as flight testing and instrumentation. Later chapters examine system identification from flight test data, feedback control and linearization.