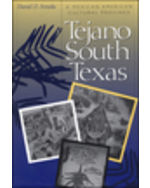 On the plains between the San Antonio River and the Rio Grande lies the heartland of what is perhaps the largest ethnic region in the United States, Tejano South Texas. In this cultural geography, Daniel Arreola charts the many ways in which Texans of Mexican ancestry have established a cultural province in this Texas-Mexico borderland that is unlike any other Mexican American region. Arreola begins by delineating South Texas as an environmental and cultural region. He then explores who the Tejanos are, where in Mexico they originated, and how and where they settled historically in South Texas. Moving into the present, he examines many factors that make Tejano South Texas distinctive from other Mexican American regions—the physical spaces of ranchos, plazas, barrios, and colonias; the cultural life of the small towns and the cities of San Antonio and Laredo; and the foods, public celebrations, and political attitudes that characterize the region. Arreola's findings thus offer a new appreciation for the great cultural diversity that exists within the Mexican American borderlands.