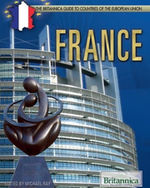 France’s cultural and historical legacies are numerous and diverse. It has long played a dominant role on the world stage, and as one of the largest countries of the European Union, its global influence shows no signs of dying down. But despite its cultural, economic, governmental, and historical achievements, France has experienced trials and tribulations, perhaps most memorably during the French Revolution, but throughout history as well. This comprehensive volume surveys France’s assorted regions, its renowned traditions, the individuals and peoples that have led it to greatness, and the struggles and successes of its past and present.