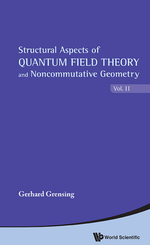 This book is devoted to the subject of quantum field theory. It is divided into two volumes. The first can serve as a textbook on the main techniques and results of quantum field theory, while the second treats more recent developments, in particular the subject of quantum groups and noncommutative geometry, and their interrelation.The first volume is directed at graduate students who want to learn the basic facts about quantum field theory. It begins with a gentle introduction to classical field theory, including the standard model of particle physics, general relativity, and also supergravity. The transition to quantized fields is performed with path integral techniques, by means of which the one-loop renormalization of a self-interacting scalar quantum field, of quantum electrodynamics, and the asymptotic freedom of quantum chromodynamics is treated. In the last part of the first volume, the application of path integral methods to systems of quantum statistical mechanics is covered. The book ends with a rather detailed investigation of the fractional quantum Hall effect, and gives a stringent derivation of Laughlins trial ground state wave function as an exact ground state.The second volume covers more advanced themes. In particular Connes noncommutative geometry is dealt with in some considerable detail; the presentation attempts to acquaint the physics community with the substantial achievements that have been reached by means of this approach towards the understanding of the elusive Higgs particle. The book also covers the subject of quantum groups and its application to the fractional quantum Hall effect, as it is for this paradigmatic physical system that noncommutative geometry and quantum groups can be brought together.