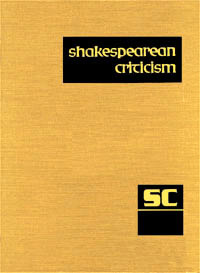 Shakespearean Criticism: Excerpts from the Criticism of William Shakespeare's Plays & Poetry, from the First Published Appraisals to Current Evaluations - Yearbook

This volume includes reprints of the most important critical pieces of the year 1993 as suggested by an advisory board of Shakespearean scholars.