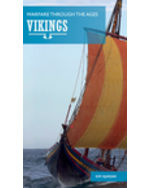 Their engrossing mythology, fighting prowess, complex culture, and ability to spread fear in the hearts of the peoples they raided make the Vikings a topic of continual fascination. This book covers both Viking society, including its social classes, gender roles, political organization, religious beliefs and practices, and glorification of honor, as well as how the Vikings spread from Scandinavia to establish themselves far and wide. Maps, charts, a timeline, and photographs of historic sites, medieval manuscripts, and Viking art and artifacts are all included. Sidebars offer extra information, such as the role of tattoos and a list of the many realms of Norse myth.