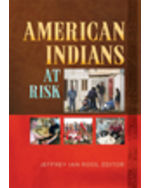 American Indians face problems in their lives on a daily basis that most other Americans never contend with, and their challenges—which in some cases are similar to those of other minority groups in the United States—are still qualitatively unique. American Indians at Risk gives readers a broad overview of what life in Indian country is like, addressing specific contemporary social issues such as alcoholism, unemployment, and suicide. The author goes beyond detailed descriptions of the problems of American Indians to also present solutions, some of which have been effective in addressing these challenges. Each chapter includes a "Further Investigations" section that presents helpful ideas for additional research.