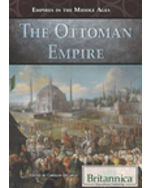 Empires in the Middle Ages: The Ottoman Empire, 1st Edition

One of the most powerful and recognizable empires to emerge from the Middle Ages is that of the Ottoman Turks. At its height, the Ottoman Empire controlled much of the Middle East and all of its trade routes, Asia Minor, parts of Europe, and all of North Africa through Algeria. This text follows the empire from its basis in the dynasty created by Othman in the early fourteenth century through its golden age under the leadership of three consecutive sultans (Bayezid II, Selim I, and Süleyman I the Magnificent) to its ultimate decline and slow burn into the early twentieth century.