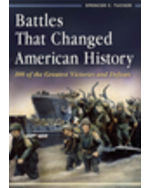 Battles That Changed American History: 100 of the Greatest Victories and Defeats, 1st Edition

The Battle of Okinawa (April-June 1945) resulted in more U.S. Navy casualties than all of the navy's previous wars combined; these heavy casualties influenced the decision to employ the atomic bomb against Japan that August. This is just one of many instances in American military history when the outcome of a battle helped to establish the course of history-the focus of this latest encyclopedia from esteemed historian Spencer C. Tucker. The 100 battles spotlighted in this work-which include defeats as well as victories-are deemed to have had the greatest impact on American history. Spanning more than 500 years of military events, the book begins its coverage with the Battle of Mabila in 1540 during the Age of Discovery and ends with the Second Battle of Falluja during the Iraq War/Insurgency in 2004. Expertly written, informative, and thoughtful, this analysis will be insightful and interesting for all high school, undergraduate, and general readers.