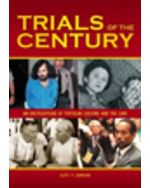 Crime and punishment are of perennial interest across the human species. Trials of the Century: An Encyclopedia of Popular Culture and the Law examines some of the most important (and infamous) cases in American history, placing them in both historical and legal context. Among the landmark cases considered in these two volumes are the 1692 Salem Witch Trials, the Scopes "Monkey" Trial, and the O.J. Simpson murder trial. A number of civil lawsuits and political trials are also included, such as the impeachment trials of Presidents Andrew Johnson and William Jefferson Clinton. Entries in the encyclopedia detail the events leading to each trial and introduce the key players, with a focus on judges, lawyers, witnesses, defendants, victims, media, and the public. In addition, the aftermath of the trial and its impact are analyzed from a scholarly, yet straightforward, perspective, emphasizing how the trial affected the law and society at large.