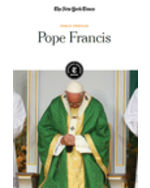 Front Cover.
Title Page.
Copyright Page.
Contents.
Introduction.
The Election of Pope Francis.
1: A Statement Rocks Rome, Then Sends Shockwaves Around the World.
2: Successor to Benedict Will Lead a Church at a Crossroads.
3: The End of a Catholic Moment.
4: Cardinals Start to Ponder Subtleties of a Big Task.
5: Cardinals Pick Bergoglio, Who Will Be Pope Francis.
6: A Conservative with a Common Touch.
7: Life on the Papal Beat.
The Pope's Theological and Social Teachings.
8: Pope Sets Down Goals for an Inclusive Church, Reaching Out ‘on the Streets’.
9: Room for Debate: The New Pope's New Direction.
10: Pope Francis' Call to Action Goes Beyond the Environment.
11: How Pope Francis' ‘Amoris Laetitia’ Could Affect Families and the Church.
12: Francis' Message Calls on Church to Be Inclusive.
13: Pope Francis Shifts Power from Rome with ‘Hugely Important’ Liturgical Reform.
14: Lost in Translation? Pope Ponders an Update to Lord's Prayer.
15: Pope Francis Puts Caring for Migrants and Opposing Abortion on Equal Footing.
The Church, Social Issues and a Changing World.
16: On Gay Priests, Pope Francis Asks, ‘Who Am I to Judge?’.
17: Pope Francis in Context.
18: The Pope and the Right.
19: A Vatican Shot Across the Bow for Hard-Line U.S. Catholics.
20: The Vatican's America Problem.
21: Easter Is Calling Me Back to the Church.
22: ‘God Made You This Way,’ Pope Is Said to Have Told Gay Man.
23: Can the Catholic Church ‘Evolve’ on L.G.B.T. Rights?.
The Pope as International Actor.
24: Prayer Meeting Shows Pope's Larger Vision.
25: Tracing the Roots of Pope Francis' Climate Plans for 2015.
26: Pope Francis, in New York, Takes on Extremism and Inequality.
27: How the Vatican Can Shed Light on the Holocaust.
28: Balancing Act for Pope in Egypt: Outreach to Muslims, and Speaking Out for Christians.
29: Pope Defends His Myanmar Diplomacy: ‘I Did Not Negotiate with the Truth’.
30: Why the Pope Is Genuflecting to China.
31: A Pope Given to Apologies Has Nothing for Indigenous Canada.
32: The Pope vs. the Populists.
33: As Ireland Joins Europe's Sprint from Catholic Fold, Francis Looks South.
The Challenge of Reforming a Church in Crisis.
34: Pope Is Quoted Referring to a Vatican ‘Gay Lobby’.
35: Pope Replaces Conservative U.S. Cardinal on Influential Vatican Committee.
36: Ten Centuries Later, a Pope and Knights Do Battle.
37: The Pope Causes More Pain for Priests' Victims.
38: Pope Francis, After Criticism, Sends Sex Crimes Investigator to Chile.
39: Pope Francis Is Beloved. His Papacy Might Be a Disaster..
40: Francis, the Anti-Strongman.
41: Catholic Priests Abused 1,000 Children in Pennsylvania, Report Says.
42: Pope Francis Long Knew of Cardinal's Abuse and Must Resign, Archbishop Says.
43: What Did Pope Francis Know?.
44: Pope Francis Embraces Silence as Calls Grow for Response to Allegations.
Glossary.
Media Literacy Terms.
Media Literacy Questions.
Citations.
Index.