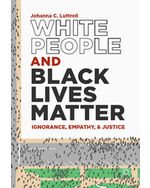 This book interrogates white responses to black-led movements for racial justice. It is a philosophical self-reflection on the ways in which ‘white' reactions to Black Lives Matter stand in the way of the movement's important work. It probes reactions which often prevent white people from according to black activists the full range of human emotion and expression, including joy, anger, mourning, and political action. The author encourages different conceptions of empathy and impartiality specific to social movements for racial justice, and addresses objections to identity politics. The title presents a new idea of impartiality that applies to the specific phenomena of social movements for racial justice in the United States; provides a critique of current discourses of allyship; and illustrates a powerful distinction between an identity politics that is conflict-producing, backward-looking to one that is hopeful and conflict-resolving.