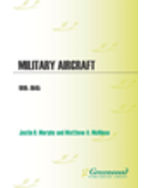 Military Aircraft, 1919-1945: An Illustrated History of Their Impact, 1st Edition

At the end of World War I, the use of combat aircraft was still in its awkward, hit-or-miss infancy. By the end of World War II, the tactical and technological reach of airpower had changed modern warfare forever, not just in traditional battle zones, but at the home front, where cities, economies, and civilians all became targets.

Military Aircraft, 1919-1945: An Illustrated History of Their Impact covers a crucial era in modern warfare technology. Ranging from the development of airpower doctrines in the aftermath of World War I to the aircraft and missions that put those doctrines into action during World War II, it provides an expert summing-up of the decades when the use of aircraft in battle came of age.

In chapters covering both the history of air power and specific types of aircraft (fighters, bombers, reconnaissance and auxiliary planes), Military Aircraft, 1919-1945 introduces key theorists and designers, describes important changes in technology and production, and recreates spectacular episodes from Pearl Harbor to the London Blitz to the Enola Gay. Readers will see the dramatic impact of the first generation of modern military aircraft on land and sea. They will also see how the expansion of war to the skies brought economic opportunity to some home fronts, and looming terror and devastation to others.