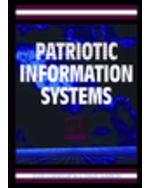 Database technology can be used for various ends, ranging from promotion of democracy to strengthening of nationalism to shoring up authoritarian regimes through misinformation. Its use affects every layer of society: from individuals to households to local governments, and is a consuming issue in the United States Government's stance on privacy, security, and technology. PATRIOTIC INFORMATION SYSTEMS discusses how, with its non-participatory enforcement ethos, its inherent bias against freedom of information, and its massive claims on IT budget resources, the information technology security system of the future may be even less hospitable to the democratic visions which some theorists once anticipated would be among the most important contributions of information technology to society.

Front Cover.
Title Page.
Copyright Page.
Patriotic Information Systems: Table of Contents.
Preface.
Acknowledgment.
1: Introduction.
2: Bush Administration Information Policy and Democratic Values.
3: Freedom of Information and Access.
4: Less Safe: The Dismantling of Public Information Systems After September 11.
5: Expanding Privacy Rationales under the Federal Freedom of Information Act: Stigmatization as Talisman.
6: Access to Information and the Freedom to Access: The Intersection of Public Libraries and the USA Patriot Act.
7: Watching What We Read: Implications of Law Enforcement Activity in Libraries Since 9/11.
8: Security, Technology, and Democracy.
9: Resisting Government Internet Surveillance by Participating in Politics Online and Offline.
10: Security, Sovereignty, and Continental Interoperability Canada's Elusive Balance.
11: Information Technology and Surveillance: Implications for Public Administration in a New World Order.
12: The Little Chip That Could: The Public Sector and RFID.
13: Conclusion.
14: Out of Control? The Real ID Act of 2005.
About the Contributors.
Index.