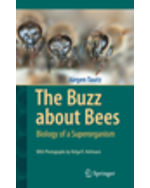 With some 230 fascinating high quality colour photographs Written in an entertaining easily understandable way The new fundamental bee book following the standard work of Karl von Frisch The author, Jürgen Tautz, is a world-leading scientist and a gifted communicator of science. “Whereas bee colonies were once seen as perfect societies of selfless workers and drones ruled by a queen, Tautz presents them as a self-organized, complex adaptive system that he considers “a mammal in many bodies”. This comprehensive introduction to honeybee biology (originally published as Phänomen Honigbiene) explores such topics as how bees obtain and communicate information about flowers, “whole-animal gametes”, and the comb’s contributions to the sociophysiology of the colony. The author has been honored for making research accessible to the public, and his lucid text will reward lay readers, apiarists, students, and professional biologists alike. The book is profusely illustrated with Heilmann’s spectacular photos, which capture the full range of bee activities—including some, such as the living chains formed where combs are being built or repaired, whose function remains unknown.”