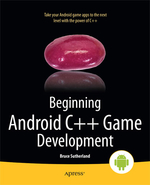 Beginning Android C++ Game Development introduces general and Android game developers like you to Android's powerful Native Development Kit (NDK). The Android NDK platform allows you to build the most sophisticated, complex and best performing game apps that leverage C++.  In short, you learn to build professional looking and performing game apps like the book's case study, Droid Runner. In this book, you'll learn all the major aspects of game design and programming using the Android NDK and be ready to submit your first professional video game app to Google Play and Amazon Appstore for today's Android smartphones and tablet users to download and play.  The techniques contained in this book include building a game engine, writing a renderer, and building a full game app with entities, game levels and collisions. As part of the tutorial you'll also learn about inserting perspectives using cameras and including audio in your game app.