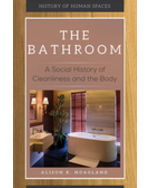 The Bathroom: A Social History of Cleanliness and the Body, 1st Edition

This book is the first scholarly treatment of the American bathroom as a space in the house, through nearly two centuries. After a brief nod to precedents set by other countries and to elements of the bathroom that may be placed in different parts of the house, this book traces the development of the bathroom in the American house since the Civil War, when the bathroom began to take shape. The bathroom is considered in light of many socially relevant themes, such as cleanliness, sanitation, technology, and consumerism. Taken as a whole, the book bridges the gap between the public and private infrastructure of the bathroom and reveals the ways in which the space transforms its occupants into consumers. Its language is jargon-free, making it ideal for students, general readers, and researchers.